The story behind the picture

The story behind the picture

Every photographer connects with his pictures a story, emotions, special
Experiences and memories. How much sweat and effort are behind the photos, can be
we as observers can usually only guess at. But how exciting it would be to learn something about the
backgrounds, to smile about some anecdotes or to talk about exciting
Adventure to wonder.

For selected pictures we present you the background story. At
purchase of the respective image, it is then possible that you can watch the narrated story
print it out. This is how Stefan takes you on one of his photo expeditions. The picture
thus becomes even more valuable and meaningful. 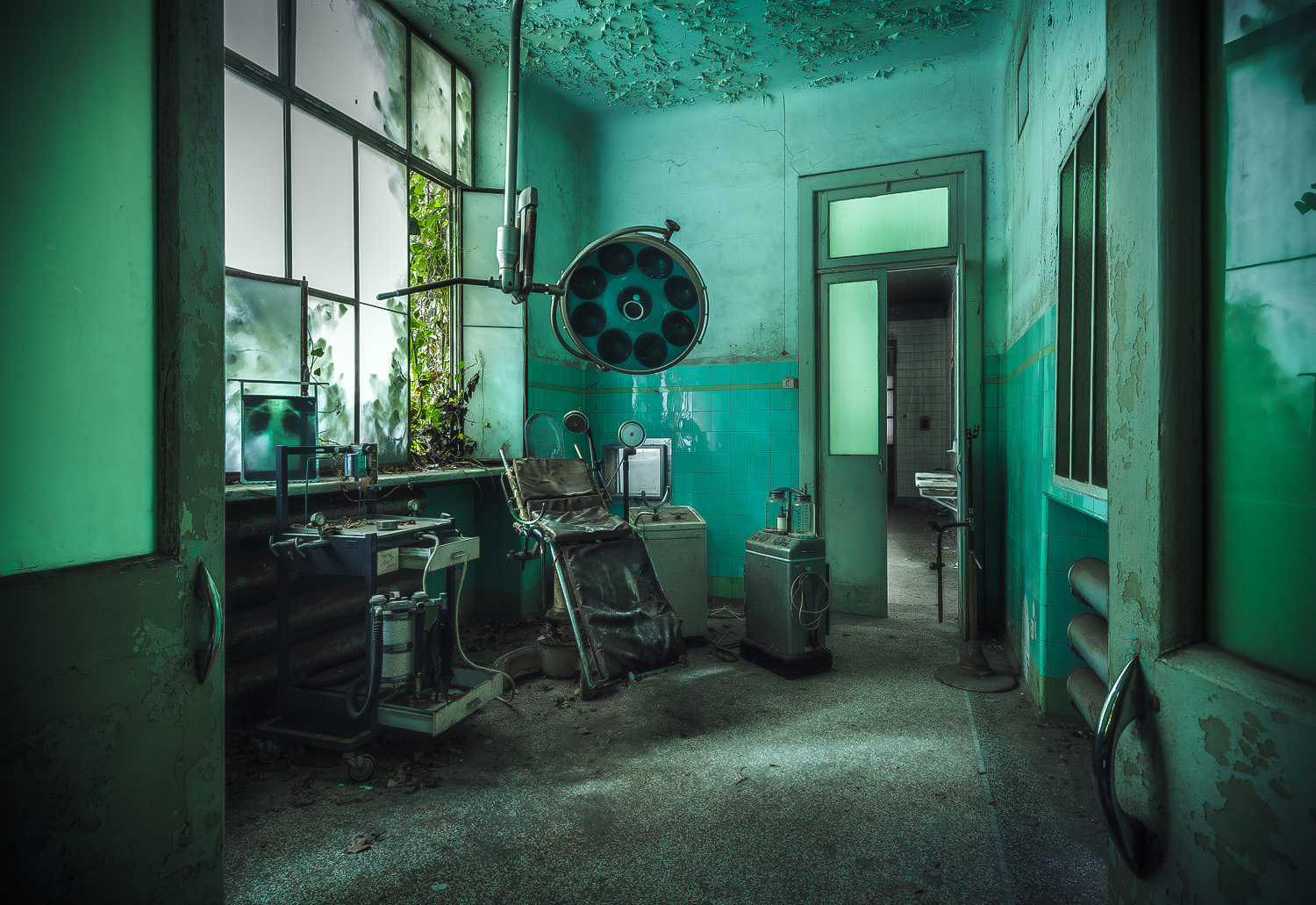 The picture Ospedale Psichiatrico is part of my series Ghost Houses - Lost Places. Even today I have the musty smell of the lonely building in my nose again when I look at the picture. We were looking for a long abandoned mental institution. Many years ago, a treatment method called lobotomy was performed there to treat mental illness. Hailed as a surgical method 70 years ago, it is now more reminiscent of medieval torture methods. It had been a very humid summer in Italy and we had to make our way into the building through the dense, jungle-like overgrown grounds. There a fascinating atmosphere greeted us. The strange silence was only interrupted every now and then by distant passing vehicles. The search for "the" room took a while. When we finally found it, we were spellbound, fascinated and also eerily taken by it. It was almost unbelievable how medical instruments, x-ray and treatment chair were apparently waiting for the next patient, but at the same time nature had almost taken over the room after the long years. Such magical moments make the adventure "urbexen" so indescribably special! And it is precisely this eerie moment that I wanted to capture for you in this picture, to take you back to this time long gone.
Just as secretly as we found this Lost Place, we left it again, according to the Urbexer code: No place will be betrayed, only footprints will be left.
left behind! 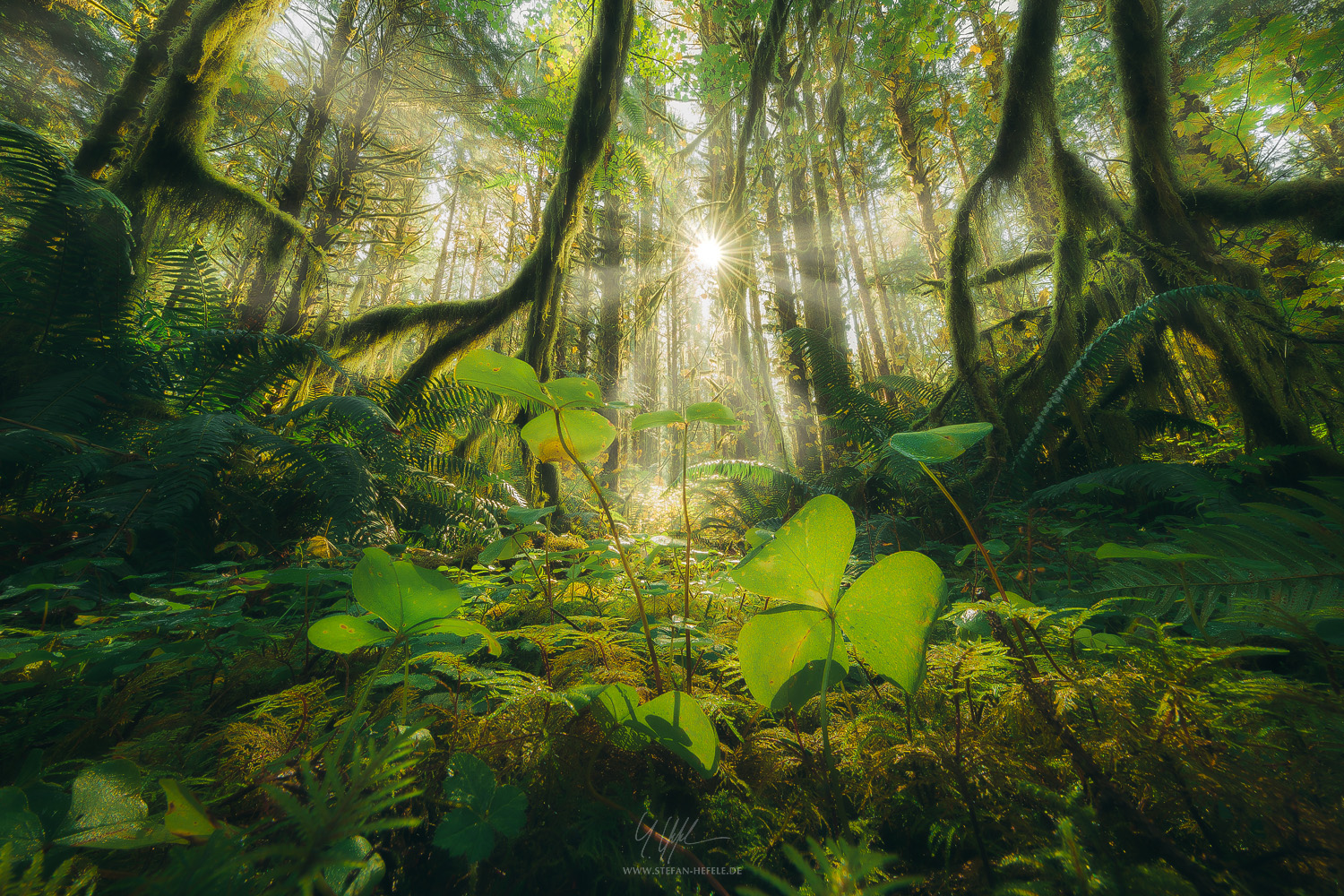 If I needed a setting for a fantasy film, I would go to the forests of Olympic National Park in the northwest of the USA. Many a fairy tale could be created here
be! I have rarely seen such a pristine and picturesque forest landscape on my expeditions. This national park, which is rather unknown to tourists, is designated as a UNESCO biosphere reserve and is a World Heritage Site. Some animal and plant species have been able to develop here, which can only be found here in the park.
This large area in the backcountry of the Pacific coast overwhelms with a landscape of gnarled, huge trees of various shades of green. The trees are
completely overgrown with moss down to every single branch. Fresh forest air surrounds you in this incredible scenery. I had the ambition to do justice to this unique backdrop with a special, preferably unprecedented photo perspective. So I made my image extremely close from the ground. The shamrocks, thanks to the perspective, like big flowers in the foreground, the branches like stretching arms reaching for the sun. The early morning light also made all the shades of green glow impressively. As I stood among the mighty giant trees, breathing in the mossy, earthy forest air, I felt magically connected to nature. I wanted to capture this moment of happiness in my picture and share it with you. 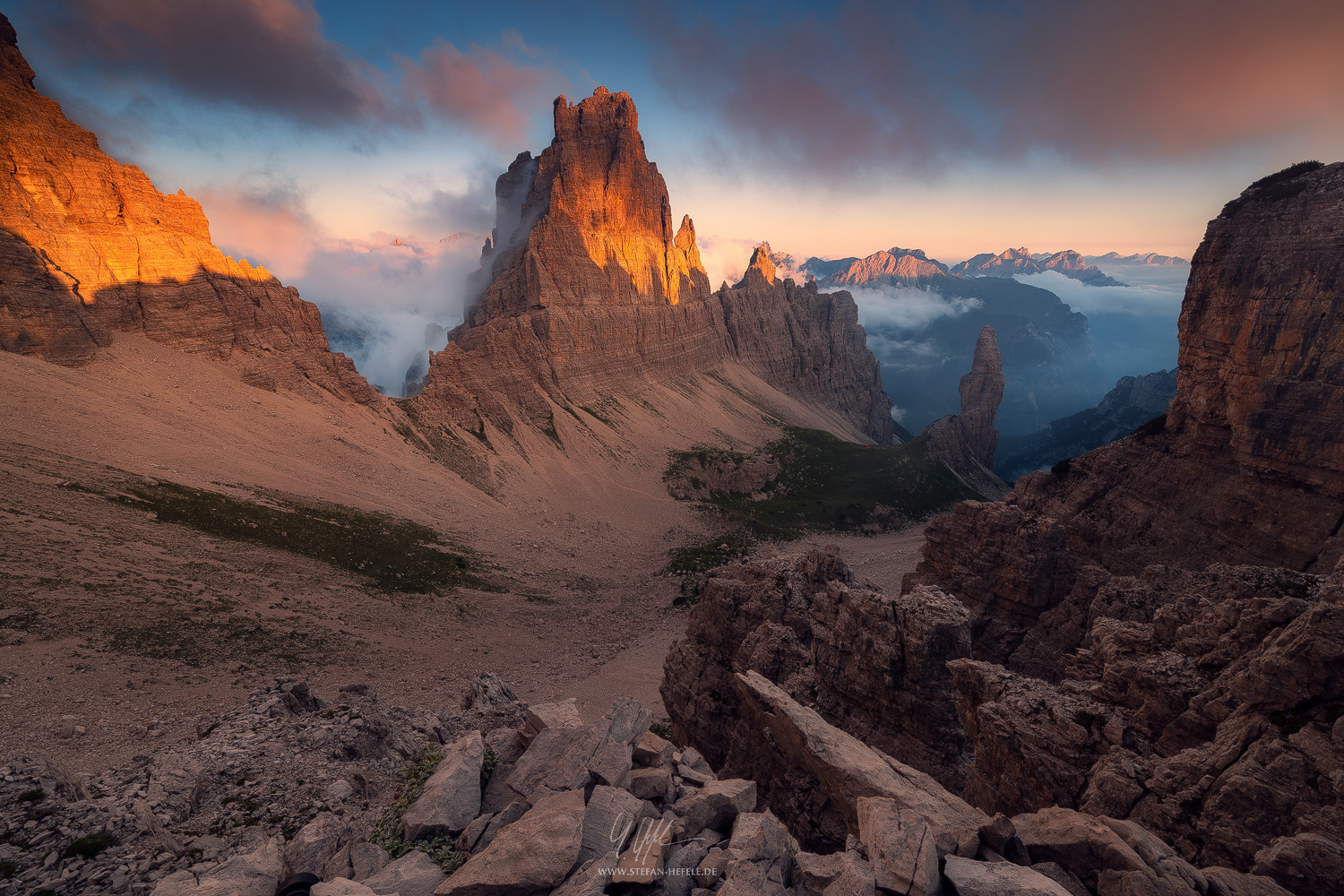 "Kingdom of the Alps"

The Friuli Dolomites are a still largely unexplored area that delights with its bizarre rock formations and diverse nature. The numerous
Hiking trails through the rock formations of the Friuli Dolomites are mainly reserved for experienced climbers, as there are hardly any climbing aids. Thus the associated nature park
also still rather undeveloped for tourism. The alpine ibex, chamois, marmots and golden eagles remain among themselves. My ambitious goal was a unique spot, the rock tower above the Val Cimoliana, the landmark of the Frialu Dolomites. Reaching it was like a little adventure. Isolated from civilization (for Alpine conditions), an ascent of 1,200 meters in altitude was in store.
The first thousand meters were also quite doable. Step by step with heavy luggage, photo and camping equipment it went for my wife and me in the height. The
The last section, however, had it in itself and brought me to my limits. Dangerous loose scree and dense fog instilled huge respect in me. I was a bit afraid to go on. But turning around was not much better. So I decided to do the former and was compensated by a gigantic view in all directions. The passing fog clouds gradually dissipated and nestled around the striking rock just in time for the alpenglow. A photo moment that made time stand still. "Kingdom of the Alps" came to mind. I also felt like a king, gazing in awe at his bizarre kingdom.

The Yosemite National Park in the USA offers endless photo perspectives. Especially the "Tunnel View" is a very popular destination. The southern entrance to Yosemite
Valley is marked by the Wawona Tunnel. It is the only tunnel on the way down Highway 41 into the valley, at the end of which there are quite a few stopping bays for a picturesque
Viewpoint for tourists there. Everyone wants to enjoy the breathtaking view and the idyll, the seemingly untouched nature, which you can see the load of visitors here
does not look. The rush at the viewpoints is accordingly enormous. Nevertheless, I wanted to photograph the familiar view itself. However, from a new, unusual perspective. The search was exciting and soon the gnarled, small, redbark trees caught my eye for a nice foreground. It was still early in the morning. Autumn was making its appearance. Temperatures at most just above freezing. So when the first rays of sunlight came over the ridge, it was a boon for me - and especially for my photo.
This photo is also available as a puzzle from Ravensburger Verlag in the Nature Edition. It
even became Puzzle of the Year 2017. 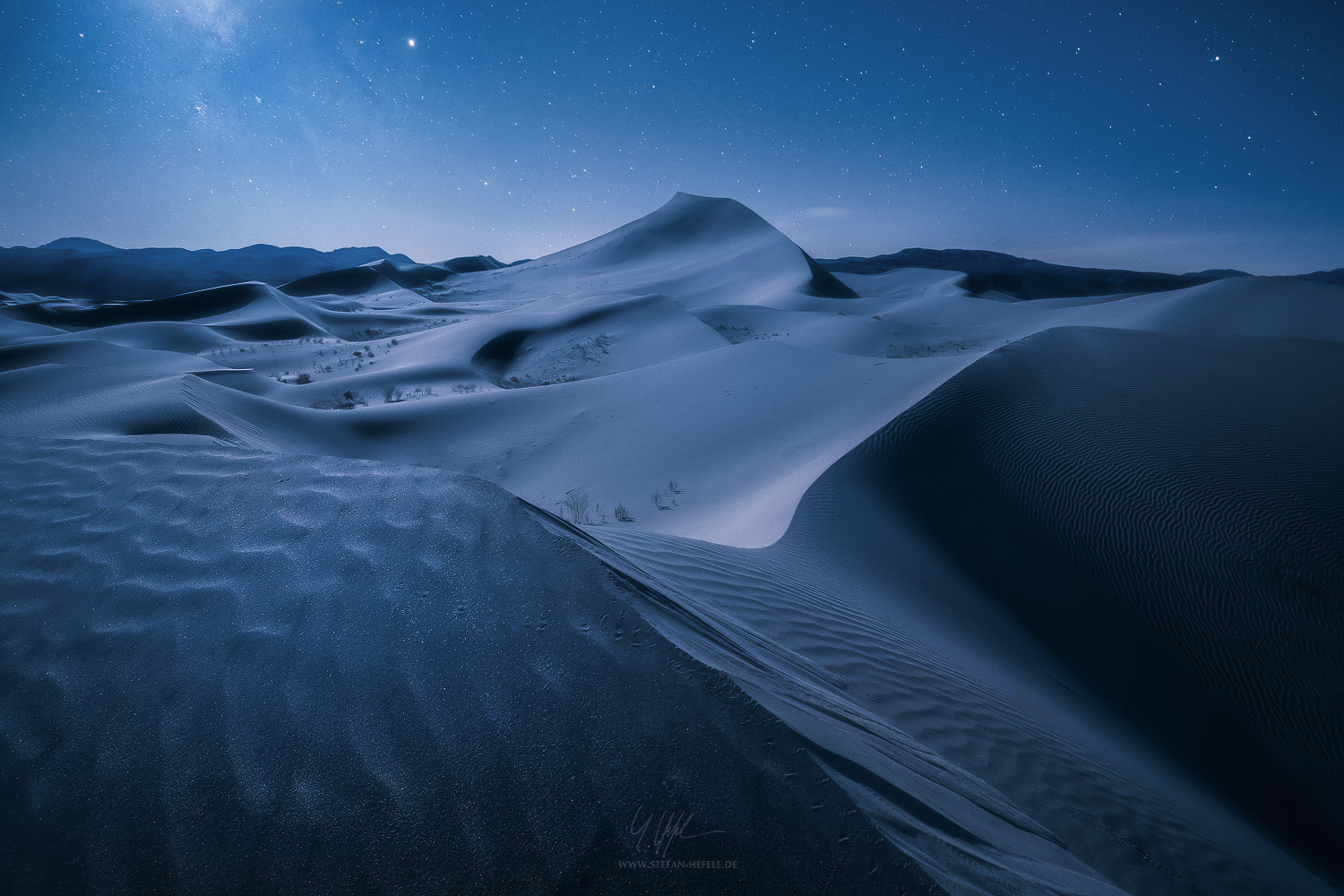 Deserts are very special landscapes. If you have ever been in the desert, you might know this extraordinary feeling and this unique atmosphere. My photo was taken in the remote Eureka Dunes in Death Valley in the USA. The Eureka Dunes are the highest dunes in this national park and nevertheless hardly visited. Not surprising, because to admire this natural spectacle, you also have to take a very long and arduous journey. The roads are very rough and take a lot of strain on people and means of transport. I was already twice in this dune landscape. The first time it was hot and windy. I can still feel the blazing heat of that summer day, the sand was as hot as hot plates. The second time, on the other hand, it was absolutely windless and calm. When night falls, it becomes cooler and more pleasant. The animals wake up in the sand and you have to take your steps much more carefully. Above me the stars, the wide milky way and light moonlight let me catch a very peculiar atmosphere in the dunes at night. It awakens an almost indescribable feeling so far away from everything. The infinite silence and stillness seemed almost oppressive - but only almost. I felt safe in this endless silence, enjoyed it and wandered through the gentle landscape lost in thought.